I am really glad we decided to go to Capitola this afternoon. On the drive from Half Moon Bay to Santa Cruz, the waves were huge all over. When I came to the Jade Cove, I had to stop the car and take the shot. The waves here were at least 20 ft on a bigger set, and crushing really hard onto the rocks on the left. 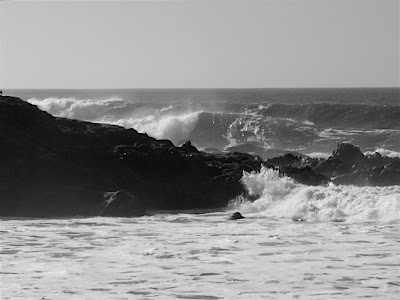 I was a bit worried about if this situation would be everywhere all the way to SC, but when I arrived at Capitola, I was really relieved to find that the area was much better protected, and while it was still taller than myself on bigger sets, they were manageable.

It was definitely a long board scene, but I took out my trusty Takayama 7'2 Egg board, sat a bit further inside, and I really had a lot of fun. Some rides were really long and was able to do a lot of ups and downs.

Observations on Some Surfers: Going Straight Is An Option

Surfing on waves in one thing, but you can also get a lot out of just observing. On this session, I saw several people who were otherwise on good waves but eaten up by the waves too soon. The main problem I saw looking from the side line was that they seemed to be determined to stay on the trim and totally oblivious about other cards they could draw to stay on the waves. Should they cut down to a straight down line, they could have regained the speed, get ahead of the wave, and with a mighty sweeping bottom turn back up to the wave, they can stay on a ride.