Session 8003: The After Mass of The Storm at Linda Mar

Winter surfing in Northern California often is a fight with the rapidly changing nature. With the weather system moving fast, often 35-45 mph plus, these systems can move close to 1000 miles a day that can dump record rain and wind gusts one day and move on, giving a nice, clear and calm day after.

We just had a record breaking storm on Friday last week, that knocked down power lines in many of our communities. In Half Moon Bay area, where I live, the power was down for 7-8 hours on Friday in the whole town. The whole town outage is actually a good news. If this was a tree-down in a neighbor, and only a dozen homes were to be affected, it could be a low-priority fix taking 2-3 days to get the power restored. Power loss is one thing but it would be a pisser when we start to spoil food in the fridge. We suffer this just about every single year. Thank god, we have gas cooking, we were able to continue cooking.

With the strong winds almost anything that could be knocked down went down. Just about every big wide road signs were down on the highway, and we witnessed a Wells Fargo sign tipped over too at Half Moon Bay branch. This storm was especially worse because the winds were southerly most of the time and most of our roads run N-S direction so the signs were hit direct by the winds.

Back to surfing though, finally the storm has left us and we had a small window of opportunity today to get out with the 11 ft 12 sec WNW swells and practically no winds. Looks like in just a few days we will be back to raw messy huge waves and winds again!

This picture is our famous "world's most beautiful Taco Bell" in Linda Mar, Pacifica. You can see the only remaining part of the signage is the word Bell. 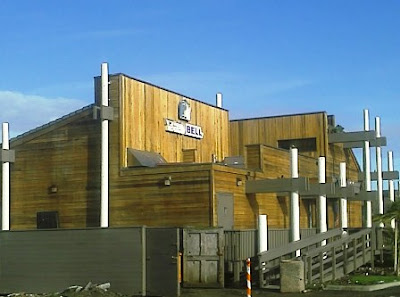 Look at the amount of debris on the parking lot. It is showing the dramatic spill of the water into the lot. The lot was muddy all over. 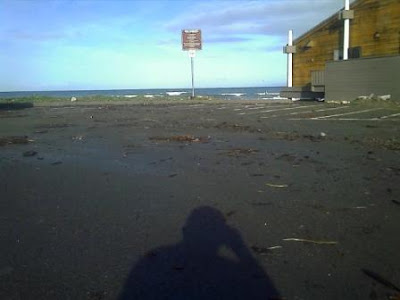 However, the waves were back to "normal" with up to my shoulder level, on a very mushy side and many long boarders were having fun. I had a couple of rides on that's on a "Fun" scale this morning on my quad short board. 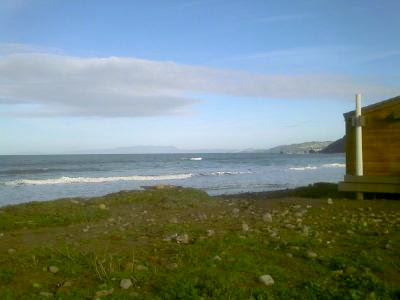 See You Out There!

The "Bell" part of the sign was already repaired this morning!