The waves were in a bit better shape when I arrived at the beach. They looked more surfable than yesterday. With the period hitting 19 seconds from WNW, I picked the spot that's more protected from the direct hit. I was hoping that there would be some fun ridable waves, and looked like there would be.

But it is often the case, what you see is not always what you get. The paddle out was hard enough, already with prevailing wind chops from the results of the winds out in the ocean, though the winds did not hit the beach yet.

Frustrated, I paddled in and was ready to get to work, I waited for the next white water to take me to the shore. Then I realized that I was being sucked into fairly fast rip currents. I decided to experiment; I just decided to just float and see how far it will take me. Remarkably without almost any paddling at all, I was back at the outside. For me it was fun, but I would imagine it will be a really scary experience if someone was caught in this as a victim. It was relatively going fast today.

So I decided to wait for another wave to ride, but waves were not shaping up still yet.

Another mode change I have decided to paddle further south just so that I get enough exercise for today, and finally I found a spot that was breaking a bit mellower, and took a ride. That was short but sweet that let me score a couple of turns. I paddled back for the next but no good wave came and the I ran out of time. 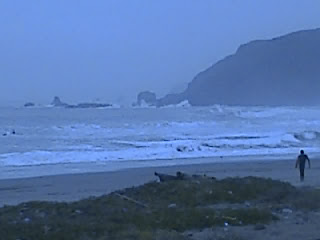 Email ThisBlogThis!Share to TwitterShare to FacebookShare to Pinterest
Labels: 7'2 Egg

don't feel so bad that i'm sick now. hopefully it cleans up for the tail end of this week. can't wait to get in the h2o!