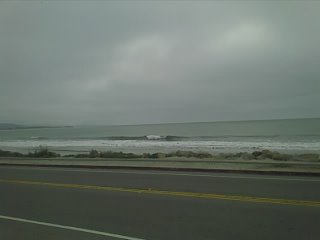 The picture looks kind of flat. In fact it was rather flat for some time, and I thought I would be paddling back without catching any waves, but there were good periods of some reasonable size sets. As with this place, most of the set waves crumble.

It almost seems that the first or second wave set fills in the water, and while the water is filled in the second stuff comes in and it is a bit smaller but often smoother. It just seems that way but I will observe further and write more about it if I find more about it.

I just watch the pattern for a while, and I would usually let the first one go and see how it breaks. Then adjust the lineup a bit, and paddle slightly outside of where I think it would break next.

There are a couple of things that are starting to work better for me recently. One is that I have more confidence in paddling so I can try from a bit further out than I have been doing. This seems to actually be one of the keys, but until recently I have not been successful at it; as I did not have enough paddling power to get that initial impulse power cranked up. It is also a whole body effort. I am paddling hard and kicking hard all at the same time.

Another thing, which is also due to improvement in paddling, is that I am starting to be able to insert myself diagonally more consciously and controlled during the take-off. I still need and want to take off straight down but as soon as I feel the board and especially the tail caught the wave, then I will paddle strong one or two strokes with the outside arm of the turn to set up the initial direction, and I also tilt my body a bit to the inside of the turn. It is almost like the body boarding take-off technique!

Ironically, while I am a regular foot, my right arm seems to be stronger so I have a bit easier time inserting to left!

At any rate, between these two tings, I was able to get two really satisfactory take-off and rides this morning, that kind of event always brings a lot more powerful stoke at the end of the session and the rest of the day.