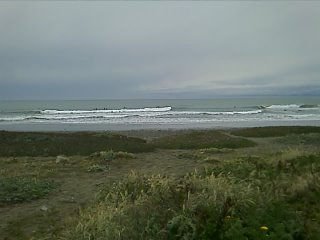 This morning's session started out OK, I think I caught some bit of fun waves, but the tides were still low. Someone told me a long time ago that immediately around the Easter we have a period of negative low tides and it works out good in Santa Cruz. He was probably right.

At any rate, I had fun for a while. But I have to figure this one out. On an incoming tide when there is much stronger tide surge like the one this day when the tide go super negative to super positive, I think there is a period of time when some big sets breaks. I have seen this happen many times, but I will try to observe if this is actually the case.

At any rate several of us who were there were creamed by these big overhead set waves that broke over shoulder high depth and it was a bit frightening, because having been too late to paddle to the outside, I went all the way to the top of the wave then took a dump and smashed on to the bottom, held down there for a bit. Good thing nothing broke, but one would never know when this sort of thing happens.
Posted by Unknown at 12:42 PM