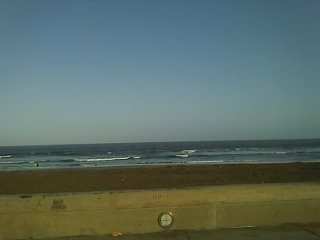 According to various flu reports, this winter's flu outbreak had to wait until March, and there are a lot of people in the coast side who have been sick in the past month or so.

I too had to miss some action for over a week since I had been hit by another virus attack. I could have gone this weekend, but I decided to be extra careful this time not to get back into the sickness. We were thinking that for the next flu season we will get a shot. I always have been but since the vaccine shortage of a few years back, we decided to be good citizens and allow other people who do really need them to get them. But it looks like the shortage has been over.

This morning, I looked at the Jetty and it was not very appetizing, so I went up north, thinking that if Linda Mar is not going to work, I'd skip surfing and go straight to the desk. I almost did not surf, but then I wanted to see how bad of a shape I was, and I thought that I should just make sure that I paddle even though there was some stiff onshore wind and waves did not look good either from the shore.

Well, I was actually glad that I went in though. This, almost always, seems to be the nature of surfing. There always are waves to surf even if it look pretty bad out there. And especially more recently, I actually can get the most out of the worst, thanks to surfing years in these mostly fickle local waves. I did catch some waves and though the rides were nothing to write here about, it was a good practice.

On these small poorly shaped waves, I had to paddle extra hard to get the initial speed. I also had to try to get up on the board as soon as possible so that I can scavenge any time left on the surface. And the positive side of this is that it really help you tune the take-off ability and actually getting up on the board and trying show that it can be surfed is quite rewarding.

So, if either you or myself think that it is not good to get out, we should think again, there might be some challenging waves out there waiting for you!