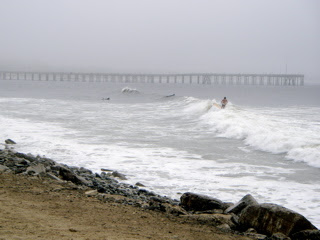 I had a long weekend of surfing in at a town much further south from where I live. The photo is not from this trip but from my September trip last year. On this trip I stayed close to the beach so I ended up walking to the break, so as a result I did not have a camera with me.

At this point of my surfing skills development this is just about the very perfect spot where I can really practice some of the things I have been working on. Trying practice in Santa Cruz has been difficult due to really a huge crowd and also some of the breaks are still beyond my level for careful practice. So it is worth 5-6 hours drive to come here every so often. A change of place is also good because the change in break quality also gives me a bit more insight. Somehow, surfing at familiar spots too much tend to give me a bit of habit, and whenever I out to places much different, I get to realize that.

Waves were much smaller than the picture but what's really nice is that even smaller waves hold some shape, and if there is a shape to the wave, then I don't really mind the size whether big or small. In September some of the bigger sets were above my short stature here, but on this trip even the biggest set were just below my chest.

I have been pretty happy lately as I am starting to get enough paddling power these days that I can actually catch waves when previously I was just left behind, and that means that I can actually paddle a bit further outside of the break line, and that means that I can take advantage of more wave. Compared to this, I used to sit much further inside and wait at the spot where it is just after it breaks so that I don't have to paddle so hard into the wave, but a bad part of that is that I don't get to be in the wall of the wave as more consistently, unless the waves reform. I think that it one of the bad habits that I have acquired surfing a lot of waves that close out a lot. There, there really isn't much use in paddling from outside, unless you are on a long board. But many of these close outs end up reforming again in the inside and so I can often get fairly good quality rides. I still do that, but now I am staring to have the outside option as well.

I can also get a bit more speed from the get-go, so even if the waves is shutting down a bit faster, I can go further ahead of the wave, and when that works, then I am usually all set for a longer ride and a clean pull out, the kind that I just immediately lay on the board and paddle back.

The next project for me is to getting this to work more and more consistently. The consistency comes from two angles. One is more proper waves selection. I am still not as good as the top people in the water when it comes to it. Some of the people I observe are always at the right place and always pick the right wave and always ride for a long time. They don't mess around.

For me, I still paddle around a bit more than some of the best people, and I get too excited with any set that comes and often pick the wave that closes out on my both sides.

If I can get more consistent like that, then finally I will be free to experiment with and polish up all sorts of surfing moves on the wave. I can hardly wait, but it looks like still a lot of work curved up ahead of me.
Posted by Unknown at 8:54 PM