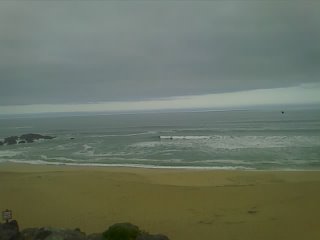 With the types of swells in the mix, I decided head north a bit this morning. During week days, I have time constraints as I do have to show up at work after surfing like everyone else does. My boss is understanding that I show up a bit after the normal commute time and leave a bit after a normal commute time as well. I really think that it is good for the environment to time shift and share the road.

This morning turned out to be a fun morning. I was the only one guy out for quite some time until someone else showed up with his Fish board. There definitely were quite surfable waves out there so I don't know where other people went. Well, the tide was on a low side and probably those who can pick their surf time were waiting for the tide to improve, but that was not an option for me.

This spot is notorious for its strong rip currents, and I chose the spot that was easy to get out. I took a ride and tried to plow through oncoming sets, but it was amazing that with a bit of paddle to the side, it makes a world of difference in getting out. It is almost the point of being scary, and that's why I still don't usually go all the way out, but this morning, it was so easy that in no time I was completely outside. Still, some sets closes and some sets are decent and I tend to pick the bad ones!

I wish that I had more time this morning, as when I got out there were some more sets coming in.

Surfing continues to take a lot of time and patience to really learn the best skill set. Lately I have been sensing some progress and I see the door to the next step but I still have not been able to twist the knob to open it. There has been many number of these doors that I had to open, and I am certain that there will be more.
Posted by Unknown at 9:59 PM