Session 7064, Only One Guy Out, A Bit Challenging 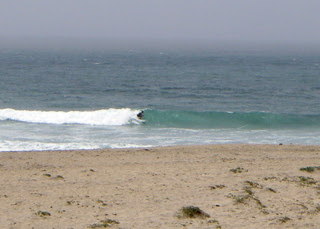 With the super low morning tide, I gave up on the idea of surfing early. Hanged around the house for a bit then headed out at 10:30 time frame. Drove further south today to get out of the fog. It is amazing that as soon as we hit the county line the fog starts to clear.

We stopped at the county line but it did not look too good so continued on further south and arrived at the spot in the picture. 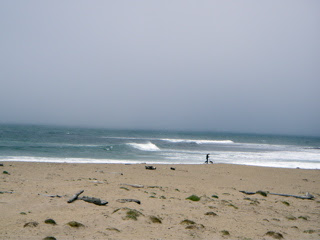 The onshore wind was starting to kick in as the water surface started to roughen up a bit. There was only one guy out and he was not doing too badly. To the right of him was a easier peak than he was going at.

As soon as I approached the water, the ocean was resisting my entry a bit, welcoming me with shore break that was definitely taller than me. But I did see that this was the entry ticket where the channel has ripped wide open beyond the beach break.

I waited for several minutes and then as soon as the lull hit, I leap frogged into the water, throwing the board ahead then landing on the board, then start to paddle really hard. My guess was correct and I was in the middle of agitating water draining back to the ocean. Then it dissipated, but I was totally at a further north break where it would be a bit more difficult. A wave came, I tried to catch but it crushed into white water mess. I paddled back right away and waited to see if I can catch the next one. Luckily it broke a bit ahead of me and I could just ride straight back in.

I walked back up the shore and back to square 1 but this time I aimed left. I was at the dead center of the rip and with not much effort of navigation, the rip took me to the south peaks that was much smaller and easier looking.

It was a bit of wait but when the set cranked up, there was a long period when the waves came one after another. I tried to catch the first wave and I pearled severely; drunk some water, but I went back to the rip and came right back out.

After a few more tries, there was a bump in the perfect shape that came at me and that was a perfect wave of the day. I paddled looking behind, and lifted my face high up to set up the direction. I could see the slope, the initial line and there is no threat of anybody coming my way, and I executed everything right (to go to left) into the little pocket it formed. That was fun because I was just riding fairly high on the shoulder for a while then be able to cut back and ridden out the rest of the wave.

I screwed up the other waves, but this one, I think I will remember for a while. I will make this kind of rides more consistent.
Posted by Unknown at 8:26 PM