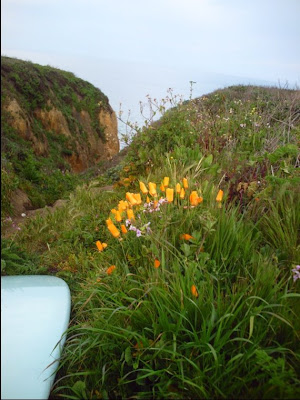 Sets were really very far in between and when they came it was hard to catch as the waves either backed off and did not break at all. 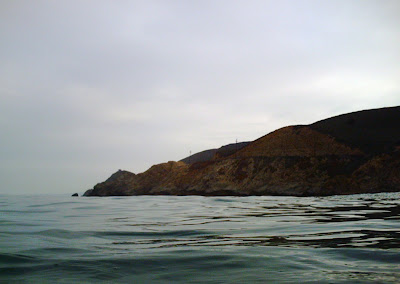 Two unusual things happened this morning that would be worthy of reporting. The first was that while I was waiting for a wave someone popped up from nowhere and asked me what time it was. I then asked him where he came from, and he was at another beach further north and paddled there and all the way back. That's quite a bit of distance still since there is another cove in between!

We shared the lineup for a bit, but he took off. I waited for more waves but nothing came. I decided to paddle back to the path, instead of walking back, in order to burn today's quota's worth of calories.

But suddenly there was a huge "Whoosh...." sound just about 10 ft length away from me, and two huge black shadow came up the water. I thought for a moment, "Oh shit. Finally it is my turn!" And when they surfaced completely they were a pair of whales, and the sound was them blowing the water.

I have surfed closer to whales before but this was really close. Basically this was happening in the same space of my bedroom. I turned the camera on right away, but they did not come back or re-surface.

Any time I go out I am always mentally prepared for the last session of my life, so it was not so heart pumping event but I would also say that I was relieved and also really happy to see this special event!
Posted by Unknown at 9:04 PM

sheesh glad it wasn't a shark