WavLOG
Day 7174
Christmas at The Jetty
There are a few days out of the year when it is a holiday but not many people go out and surf. Super bowl Sunday is one of them (especially to avoid agro male surfers), Valentine's Day, Thanksgiving Day and a day after that and Christmas Eve and Christmas Days are usually less crowded and the lineup tends to be less aggressive. Last Christmas time, the condition and the weather was getting bad and for two weeks after that there was no surfable waves, but this Christmas we were presented with a fairly fun waves right in Half Moon Bay.

As usual, the picture cannot justify the types of the waves we had today (they almost always look slow and smaller), but with WNW hitting us up to 14 ft and 14 seconds type range, our local break was alive again, and without much winds, the paddle out was relatively smooth if you do nail a few duck-dives through the sets, which was also fairly well spaced out. Wish that I could get out on a bit lower tide as the Jetty was filled with water with a high tide and the water was bouncing back out a bit hard.

Thinking that I ought to attack the wave from the outside earlier, I first took out the 7'4 Egg but I had a hard time negotiating for the surface of the wave, so I got back and swapped with the 6'5 F4 and the rest of the session was much more fun. Also with a shorter and lighter board it was easier getting out. These days, the length of the board is no longer the main factor in my ability to paddle out, which is really great.

This, still is not the Trestles and so there are many more close out waves and such but among the sets there were some fun and over-head size waves that popped up. Some drop downs were fun a bit challenging but after making them, it was fun and was able to continue on to the doubled up sections for some time. 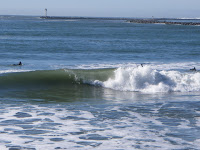 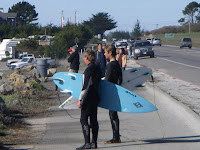 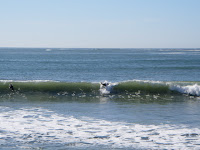 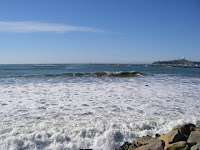 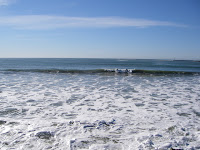 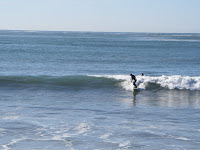 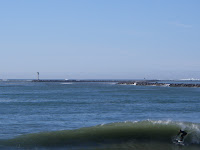