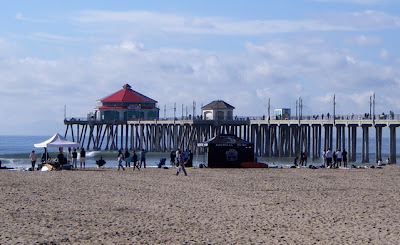 "The Surf City USA" that is the legally registered trademark of Huntington Beach, and as most of us know that there has been a bit of battle going on between Santa Cruz and Huntington over this title.

Until today this is the spot I drove past by on the way to other spots further south, but as a California surfer, I should give this place a try. Of course, one session will not justify a review of the spot, but with that in mind, I will write on.

Apparently one of the hottest lineups are either sides of the pier. So as a "tourist" I shot for the pier and already the north pier take-off spot getting too hot, I have opted for the breaks much further south of the pier. I would have paddled out just under the south of the pier if there was no contest going on (on Monday!?). Otherwise, I could have tried my pier shotting skills and wrote about it today ;-) Of course, I had to look cool so I took out my Stretch F4 Quad today.

By the time I have arrived there the tide was on the way out and getting lower as the session progressed and wave quality has starting to suffer. The waves were similar to what I am used to, mostly close-outs with occasional makable shoulders, so like I wrote yesterday, I did opt for the occasional inside shoulders that popped up. I must also admit that I was probably 20+ years older than anyone there in the lineup (it was Monday at 9 a.m. mind you!)

However, when the "makable" shoulder happened, it was quite ridable and I really had some fun rides that gave me a chance to go more "vertically" (relative to myself that is). So in a nutshell, I really enjoyed surfing here at Huntington.

It really reminded me of surfing at OB with very very strong side-currents going and it is relatively shallow all the way to the lineup. Paddle out was not too hard, but by the time I paddled up to the lineup I was down south at least 2 or 3 city blocks. Then I catch a right, then it would be 4 blocks down. So for me walking back, paddle out, take a ride and walk-back was the strategy I have employed.

This can be only my subjective impression, but at most So Cal breaks, even when the wave closeds out, it was not so over pounding like I would get to experience even in a summer 10 ft 8 sec days at our local beaches at home breaks.

Overall the waves were a better quality than yesterday at El Porto, but then the quality was not superior to anything I am used to at our home breaks.

Tomorrow morning, I think I am going to head back to the lower Trestles.

Email ThisBlogThis!Share to TwitterShare to FacebookShare to Pinterest
Labels: Huntington

Raaj - I was back there twice last week, and this time there was more south swells all across the OC and SD county breaks. Surfed mostly at the usual "T" spot much further south which I still like the best. It was also crowded there I've ever seen so far.

The two sessions at the HB was quite fun. This time, I saw people are paddling out through the channel that formed just next to the piers. I tried but the current was really strong going "North" so I was almost going to hit the first set of pillars but then I was right into the middle of the hottest spot next to the pier. Specators on the pier, hot surfers... groms that rip, old guys that rip... it's quite a scene out there. Definitely not a typical day at Linda Mar.

I paddled further "North" (actually don't need to, the current will take you there). Found easier spots but even there there were some dudes who ripped. Just amazing with the level of surfers in these OC breaks!

We will be back toward the end of Feb.