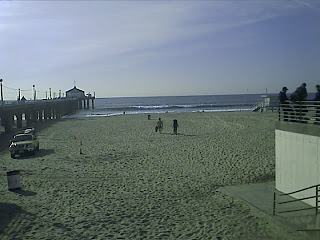 This morning, I hooked up with Luke who has been a StokeMaster member for several years, and who has recently moved from the Bay Area to LA.

As much as I liked the long smooth wave of San Onofre, a bit faster closing out waves with occasional makable shoulders is where I really shine in surfing, especially with short boards, so when I saw the crappy condition today in front of me and not many people are catching, I was kind of happy that there will be a chance to try catching as many of these waves as possible.

How did I get to be like that... In a nutshell the darn almost consistently crappy "home breaks" in Half Moon Bay area. Of all the sessions that I put myself through, there simply are not that many days that could be called really fun. It usually involves either very small shapeless waves or paddling after paddling through white water then only to be pounded in massive close outs from the outside lineup and being adrift in strong side-currents forcing me to constantly adjust the spot.

But those situations have taught me some important lessons and if you have been a devoted reader of WavLOG, you've read this all along, but if you have just joined here is the summary.
Tomorrow I might try the "Surf City USA" Since I've never surfed there up to now.

Let me know how you are progressing on the StokeFORUM!