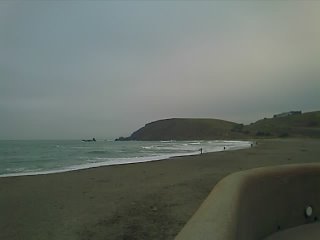 Great "glass off" session with my friends and very fun condition, again, wish I brought a long board, but I was actually thinking about wave quality in the last couple of days so I want to share with you some of the thoughts that have been developing.

First, there is no doubt that I do want to get into more hollower situation. It is a bit frustrating when other people with longer boards are catching waves, and I am not. But then in order to do that I have to be in the condition and/or places where such wave is supported. Definitely, the place we went in Mexico had the quality and the size of the waves challenging enough for me, and at the same time I could definitely say that I had fun with these waves. These waves do happen, especially south of Half Moon Bay and a select "secret" spots. And definitely at The Lane or San Diego. I've either seen them, and I've actually been in them and surfed but in most cases to get to these waves, I have to go past a lot of white stuff and then battling with huge currents, compete with other surfers... none of which are still not a big forte I have.

But some of the Mexico waves did not require as much effort to get out (though it was at the upper limit of what I would consider comfortable), and when a wave broke, it broke in this thick slow movement, but once I got in the wave, it got increasingly but really hollow and kept pushing and pushing me along the line. Combined with the speed and the cutbacks I can make now, I could keep myself in sweetest spots much longer than I could ever have been able to. It really was a great fun and also a practice.

So I think I now know what the quality waves are and what are not much better than even from my experience a year ago. It was kind of preview for me to catch hollower waves that we encounter around here often, and that means that things can happen much faster pace and I need to have enough skills to keep up with them.
Posted by Unknown at 7:35 PM