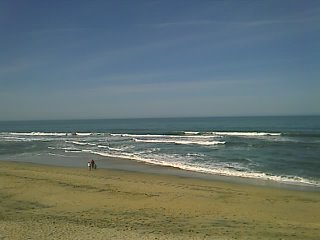 I did do a local session. No wind but tide was super low. But riding crappy waves require a kind of diligence and commitment.

By doing this, I am starting to have more satisfactory rides even in these dismal conditions than before, and I have been thinking about how I can even extend this. Because I do not have the luxury of picking the place and especially the time in my most sessions (that consists of 90 minutes before going to work or even on weekends before going on to do some other stuff), I am purposefully choosing the way to horn my skills to surf a wider range of surf conditions, and not the other way around.

Through last couple of months it has became much clear to me what my next hurdle is to accomplish this goal.

I have wrote off and on about how the waves look so good when some good people are out in the ocean even when the condition is poor. This is especially notable when there is a local contest going on. More than a few times, I thought "the contest holders know when to choose to have contests." But often the next day has the same condition at the same spot and it is now back to looking "so so condition" again. So the foregone conclusion is that it is the level of the surfers that make the waves look good.

And today, even though most waves were, what I consider to be close outs, there were several that were catchable and I did catch a few from those, took off, injected myself to the right or left early on, got in proper line and did execute the bottom turn to get up to the turn number 2. What I could clearly see was that should I have had more speed, I could hop over to the next section and continued to go up to the next lip or shoulder, and if I did that I could have had much much longer ride.

This basically seems to mean that I should really work on gaining more speed during the first turn, and that probably requires me to put much more weight or exert the force on the board, if necessary to pump or step on it harder. I know I am starting to do that, but what I am doing is still much inadequate to build the necessary speed. Partially this is still a fear that I have. Sometimes the technique works and the board goes fast but then it seems to be going so fast that I just get scared and wipe out.

Sometimes, and often, I am not on the board fully and it slips away. This is probably a precision issue.

So for many of the sessions this season, I will be working on both the take off and the speed. If I nail both of them down, I think I can then really make much better turns.
Posted by Unknown at 10:01 AM