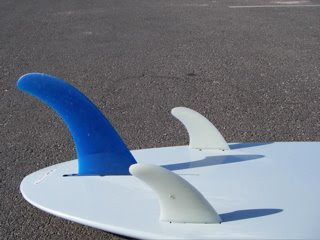 When I broke my leash on Wednesday session, I stopped by at Sonlight Surfshop in Pacifica and did two things. I did buy the new FCS leash (since Da Kine is the one that snapped) and also a set of fibrefglass FCS fins. You can see in the picture in this post how they look like. They are all fiberglass fins. Actually I tried this on Friday and so here is the report.

After adding these fins, the performance of the board changed significantly. Now it rides really more like a short board than a long board. This board is 7'2 and not a long board, but it is still long enough to walk on the deck and I can really ride on the front tip of the board once I got a speed on it when the board is moving at a good rate. So I have not given up on keeping the big center fin.

But for the "heck of it" I have added small side fins on the board and I've given it a try. As a beginner surfer I have not really believed anyone saying that the fins can make a world of difference before, but I now can see and feel the difference.

The part that was surprisingly turned out to be good was that the turns can be made more snappier than with just a single fin. This was especially true when I execute a turn toward back to the top of the wave and then I hit towards the upper end of the wave, and where I want to make a quick turn back down up there. This could had been done with with the single fin, but what made the difference is that the board seemed to have gotten more response to the change. Previously the motion had to be noticeably more intentional and also response from the time I was commanding my body to make turn to actually when the turn has happened was slower.

I do still like the way how the single fin worked out. It really made me do things more smoothly and in contact with the water more in terms of actual feel (and may not actually been that way.)

I will continue to ride the board this way for a bit and write some more about it.
Day 60 (Sat): Back to the same spot but this time it has gotten significantly more closed out. Caught just a few waves. Then some local powerful surfing figure appears and asked to paddle back out again. It was sort of hard to say no, so I did go out. Switched the board to the quad and I had one ride among close-outs. The trick for days like this is to sit patiently inside, look for either reforms or smaller sets and ride. {D, R}
Day 61 (Sun): The Jetty was small when I got there, but then there were some really fun rights that were just the right size. I was catching a lot of waves and someone asked about if I had an epoxy board. Yes, indeed. The board does help a bit but I think, honestly, in the end what really matters is the correct lining up and stronger paddling power.
Day 62 (Mon): Checked out a local spot. It was breaking but was doing the bouncy number. Determined that it won't be too much fun even if I caught waves. Headed to LM. It was puny as it was drained out a bit also, but I had some fun small lefts. Again, faster take-offs and lot of paddling will definitely pay off on days like this {LM}.
Posted by Unknown at 8:10 PM

Is that center fin giant or is it the perspective? Are those longboard sidecut fins(small) or normal size?

I surf a 7'0" and changed the style of fins and it made a huge difference especialy in speed down the line. More fin = more drag so I'll be interested to see what you end up liking.

The middle one is the "giant" longboard fin and the side ones are "baby" fins probably not much taller than 3 inches. Up to this point I was surfing this with the middle "giant" fin only. Please keep reading the WavLOG for more on this as I will update from time to time on this 3-fin configuration.