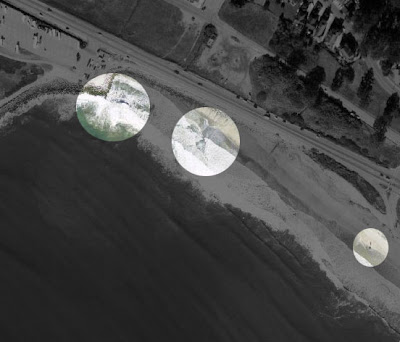 People surf at all seemingly dangerous situations, like in So Cal, people go under the piers and here in HMB Jetty people take off and surf extremely close to these rocks (I've heard they are called riff-raffs.)

I live within a "walking" distance from the HMB Jetty and as a result I surf there often, though this summer, there a stretch of months where there was not real good surf there.

But when it is happening, it is a fun place to surf and also watch people surf. I firmly believe that the traffic slow down there especially on weekends is drivers watching people surf.

Ever since I saw people surf there, I always amazed how close to the rocks people take off and surf and they never seems to collide with the rocks.

But, amazingly, not very many people get hurt, let alone smashing directly into the rocks, and that kinds of adds the element of "danger" into what we all do.

In addition to colliding to exposed rocks. There are also cluster of submerged rocks there. The picture here shows where they are. You should be careful when the tide is lower. I know some people who have twisted their ankle and lost fins. If you surf there, be careful.

As for myself, I am one of those people you may have seen surfing dangerously armed with a surfboard!
Posted by Unknown at 7:44 AM