Session 7100, Did Not Get Caught Inside! 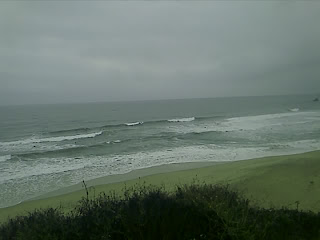 We are in the height of the summer condition where there is not much local winds, but further north in Mendocino county are usually a lot of NW winds, causing some summer fun waves locally.

Weekends usually has been the time to go out with our neighborhood friends to a beach near-by. We cover anywhere from Gray Whale to Waddell Creek on these sessions, but mostly confined to the area of Montara to within the city limits of Half Moon Bay, and occasionally we extend our visit to Pacifica. But that has become less and less especially in the summer.

After a brief surf check from atop the cliff (that's usually the NorCAL surf check), we decided (actually I've convinced my buddy to) get in the water at the location in the picture. It looked easy enough but it turns out to be the same old pattern, very hard paddle getting out. Looking back even just a year ago, I think that I have given up on that. I was even on a Takayama DT4 this time, which is a 9 ft long board. But I was able to get out without too much fuss, at least the first time. I had to time the lull and dash out. Now the dash out number works. Previous season, even dashing out was not working. I can tell this because there were couple of more local surfers that I went out a lot last year, and they could but I could not. So that's one thing that I have really starting to be able to do. I am definitely much faster than short boarders who were there, and that was not even the case last season. I'd be on a long board, and I paddled slower then!

Back to the session, my buddy finally given up after catching a few rides, so I got out too and asked him if he'd try again, and as we talked the ocean started to become calm. But he joked that as soon as one of us would step in the waves start to crank up and he went back to the car. That is usually so true!

I walked up much further into the north end of the beach and got in. As soon as I stepped into the liquid, sure enough, the waves starts to crank. It was shallow enough I could walk for a bit deeper, but more inside wither water kept crushing on me. I just hanged onto the board and let the side current take me to wherever it wants to go. But after a while, I was successfully swept into a rapid rip, and that was all I needed to get out. Initially it was a mess with water colliding from every which directions, but the further and further I paddled, it got calmer and calmer, and finally I made back to the outside. There it was just nice and calm with occasional sets coming in.

When I was starting out, I look at these people in amazement that they get out to way way outside through these kind of mess. I am vividly remembering that. First I could not even understand how they could do that, and what kind of a confidence required to get so far out. "What if they cannot come back?" "Can they swim back?" I thought that they must be awfully confident about themselves. And when I tried, I was so scared of it and I often wondered if I could continue with the sport much longer. Even a more blow to my confidence, and so to my own personal existence, was there were young kids, man and women of all ages that did with smile in their faces, all seemingly relaxed.

This season, I think that I can bear more smiles on my face as I get out in more conditions, and to me personally, I do feel that I have overcame a lot of fear, built more confidence paddling out as well as riding back. For me that's truly a sense of personal accomplishment. And this is coming from a person who was a "D" student in high-school physical education classes.

Arthur! How are you surfing lately?