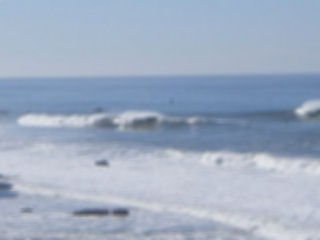 I am not going to be able to write where I went today, but it was one of those spots that a even a lot of my seasoned friends would not consider going. But a local surf buddy of mine finally convinced me to check the spot out and go. My buddy used surf with yet another local surfer who'd go out to the famous Mavericks break from time to time. Of course, none of us would be crazy enough to do that.
Well, this could have been just another day at the Jetty fighting the crowd and just being a bit frustrated. We checked a few other local spots, but then he said, lets go to "???" Even a local surf shop owner kept telling me "Mano, you ought to try the spot, man!" Today, of course is a small day so I though that there is nothing to lose. All I need to do is just to paddle out and not catch a thing.
So we did.

Normally, my paddle outs are either a two-minute ordeal or otherwise, like my last session, not a great distance but just have to fight the waves to get out. I can handle them. But this afternoon, it was more like the Waikiki session I wrote about a while ago. We had to paddle out a bit far out in the ocean, past the pile of rocks with kelps growing on them. Should this have been bigger, and if I was not careful, I'd be swept into the forest of kelp covered rocks and it is certainly a trip to a ding repair shop, if not at Seaton Coastside Emergency room (again).

Of course today was a really small day so there was not that sort of concerns, but then there is that thought in back of my minds, because just in February of this year, I was standing on top of the bluff just to watch people take these spills, coming close to what I?d be afraid of. So today, it took me quite a bit of time and effort to paddle out where the waves were breaking and with my short board, it was definitely a double effort.

As I caught up with my buddy said this is as close of an experience you can get to surfing at "M?." Well, I think that a bit of inflated statement, but OK, at least if I catch a wave in this that would make me feel a bit gratified.
As for the waves, they were actually bit difficult to catch because if I'd miss the first turn and go straight, there would be the rock waiting for you, and to add to that, the waves did jacked up quite a bit faster and more powerful than what I thought it would. I still don't have that much of the staying power and abilities, so basically for a couple of waves, the board slipped away from me (at least I did not shoot straight to the rocks!).

I did have a couple of waves from the inside, but it was difficult to judge. It is something I would need to get used to.
I am glad I did go. It was totally a new and different experience. I think I would try again when the condition is good for me.
Posted by Unknown at 7:45 PM