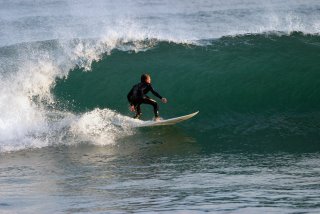 I treat surfing as a mini-version of a real-life. Of course, it is part of a big real life, but sometimes, by separating this part of life out, it is at least provides some interesting perspective in life as a whole.

This morning, we got together with three of my StokeMaster friends and set out to surf. I stopped at the Jetty first. It was really flat. I then called the others not to bother with coming up here, instead head south. The first stop in the south was at the Pescadero. From the top of the cliff as I drove the waves looked really good, so I suited up and waited for the others to show up. But waves were kind of gutless and not really surfable. By the time all my friends showed up, I had to admit that it was a bad call on my part, but then we decided to risk a bit and driver further south. A bit of frustration set in the surf party...

As the road go past the Pigeon Point, it actually runs east, this makes the cove at the Pigeon Point completely south facing. And that is a very good thing because I can gauge how the south swell is doing, and in this case, there were some waves that were breaking. I have heard a few shark situations so I never stepped myself in there, and I do not see many people surfing either at any time of the year. Besides there are a lot of rocks and I think if I am not careful there would be some board damages.

Eventually, we arrived at Waddell Creek. This is one of my most favorite spots when it works, and this morning we were not sure if it would, but we did go in. And this time, some good roller started to come in.

I surfed a lot today, and especially since the competition, I am determined to do certain things right, like paddling back as soon as possible to the lineup. I had a nice drop like the picture above, many other fun rides. I also continued to move around and try to get to where the next peak would pop. It is a real satisfying feel when the wave pops up exactly where I thought it would and there is nobody else on the wave!

So what is the life lesson I spoke about at the beginning of this log? Well, when things are a bit disappointing at the start, we took a bit of risk and tried to continue to hunt for the waves, and then we were able to leap some benefits.

Afterwards we all shared a nice lunch and conversation. Surfing brings so much to life from all angles.
Posted by Unknown at 6:32 PM