My Summer and Winter Surfing

WavLOG
My Summer and Winter Surfing


I've skied a lot in my collage days, and while chasing for the best (powder) condition is something skiers do travel many miles for, surfing requires a lot more local traveling for the "acceptable" condition.

In the summer in Northern California, I tend to look for places where there is the least influence on the prevailing NW winds. The NW gusts often continues for days and weeks at a time. Avoiding the winds is on top of my list and it is often the case that in the early morning the winds are not as bad. Come to think of it, when I used to wind-sailing, we look for about 2 PM when the winds pick up the most. But now I am a surfer, I tend to get up early and go surf before the winds kick up.

The additional complication of course is to find the place where the waves are breaking. In the area where I live near Half Moon Bay, California, most places are open to W to NW waves, but also unfortunate fact of this is that NW winds blow straight on-shore, and that makes it quite difficult. This require me to explore many places. I tend to cover more beaches in the summer going Half Moon Bay to northern Santa Cruz county. 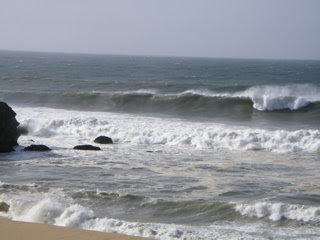 In the winter the situation is often completely different. The NW winds still blow more often than not, but not like days and weeks in the spring and the summer. There are few days, probably every other week or so, of impossibly huge swells. That will make it almost impossible for me to get out, so I substitute surfing with indoor balance-board exercise. As it turned out for me, that was actually quite helpful in short-boarding, so I would really recommend to anyone who is planning to transition from LB to SB or just to keep the hip and knee strength up. I think that the result is really noticeable and dramatic.

In between these big swells are really sweet periods, but unlike in the summer, as for the spot options are concerned, they become more limited. For example, going anywhere south of Half Moon Bay is generally not an option unless you go past the county line, and Montara is no longer an option either for me. But on the other hands places that are sleepy all through the summer (except for the south swell days) all wake up, and after a few big days, the sand-bar seems to form back again. When the buoy says it is at 8 ft or less and 12 seconds or less of the period and often the wind has stopped or slightly SE/SW then we are in a real treat in this area. With a few surf checks, we can tune in for a right spot for us and go in, have a good hour or two of a session on really shaped up waves and a lot more power than in the summer time.